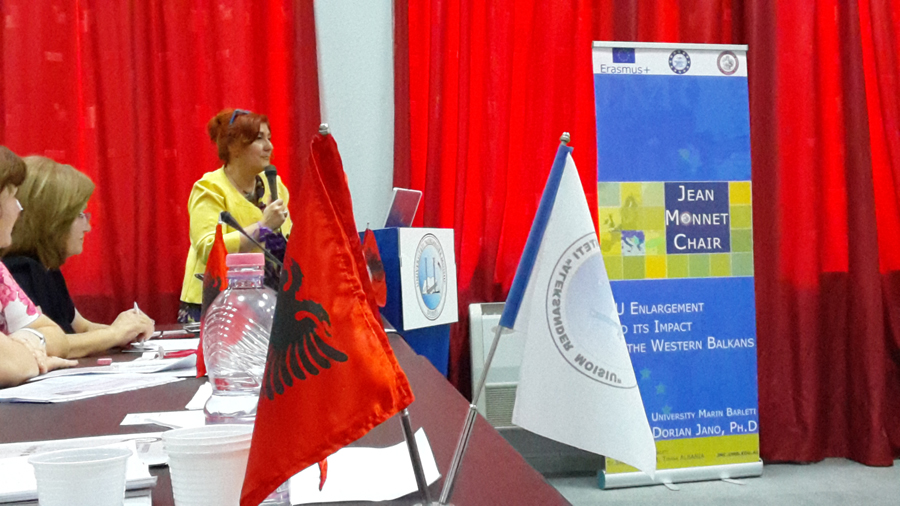 The third public talk was held in Durres, at the Faculty of Education, ‘Aleksander Moisiu’ University. Mrs. Dewi van de Weerd, Ambassador of the Kingdom of the Netherlands, and Dr. Englantina Gjermeni, Minister of Urban Development honored this event with their participation and contributes.

Prof. Kristaq Kume, Deputy Rector of the University “Alexander Moisiu”, in his greeting speech, stressed the importance of increasing the representation of women in the governmental bodies and particularly in the local government. Mrs. Dewi van de Weerd making a brief historical retrospect of Albanian women’s participation in decision-making welcomed the progress of the recent years and the changes in the legislation. She also brought her country’s experience and highlighted the practices that are still an obstacle to a more active role of women in all aspects of social and family life.

Minister Gjermeni motivated much interest in her speech bringing her long experience in support of the equality issue. The messages given by the candidates of the municipal council of Durres, nominated by SP, DP, SMI and FRD, Jolanda Mustafaj, Arian Dedej, Adriana Hatellari and Galinija Gjoni were very helpful and realistic. Mrs. Bajana Çeveli and Mrs. Fabiola Egro, leaders of two active non-profit organizations in supporting women, emphasized the importance of engaging young girls and boys in political activities as a guarantee for a better future.

Moderator of the debate, Dr. Saemira Pino, Dean of the Faculty of Social Sciences at MBU, concluding the discussion, noted that despite the current achievements the issue of increasing women role in decision-making requires further awareness of all actors in society to better understand that the representation and the active role of women is directly related to social progress and closely linked to the respect of human rights, the equality in the family, with the own essence of the functional democracy.