A wide activity was held at 22-24 May in Albania, after those organized in Granada, Spain, and Padua, Italy, in the framework of EU project “New European Citizens” as a collaboration of university youth NGOs of various European countries. The youth from France, Germany, Grand Britain, Spain, Italy, Lithuania, Romania, and Greece were welcomed in Durres where they were socialized and recreated for starting the next day the conference about Euro skepticism, a two day activity held at the National Historical Museum in Tirana. 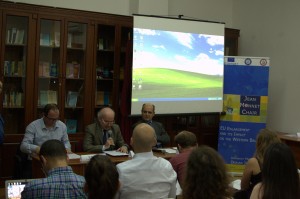 The conference was moderated by Dr. Dorian Jano, Jean Monnet Chair at Marin Barleti University. The rector of MBU, Prof. Dr. Marenglen Spiro welcomed the youth participants of the conference wishing a good job in sharing opinions and ideas on the EU integration.  The next speaker was the Deputy Ambassador of Italian Republic, Mr. Marcello Cavalcaselle, who spoke about the work done by the Italian Government to involve the youth in the whole aspects of the country life. The youth form Spain and Italy presented their works prepared for this event and the other addressed questions and expressed their opinions about being EU members. 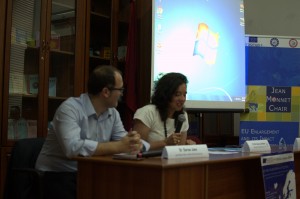 The presentation of the Ambassador of the Kingdom of the Netherlands, Mrs.Devi van de Weerd, her country has the presidency of the EU Council, was fully interest attended by participants. The ambassador underlined the importance of European Union and the necessity of a comprehensive dialogue to exceed the challenges the Europe is facing today stressing that a particular role the civil society has for educating the European values and the youth engagement for a better Europe. 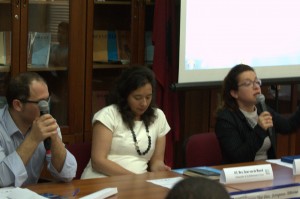 The representative of UNHCR Albania, Dr. Edlira Baka, after explained the emigration in the cases of war or economic reasons, spoke deeply about the work done in Albania in the case of coming refugees from Greece. The participants addressed a lot of questions for emigration problems dividing the economic emigration from the war situation that obliged the Syrian people to be directed to European countries.

Mrs. Silvia Josefina Martin Cortés, the Spain ambassador presented to the participants the experiences of her country as a EU member, the challenges are actually faced by Spain and compared the living style and the activities of youth in the different time periods. 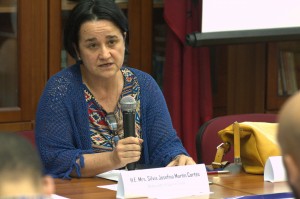 The ambassador shown a particular affection to her patriots from Spain, she stayed with them and made a long conversation.

The afternoon session was concluded by the speech of , who made a resume of the whole day discussions. She explained theoretically the Euro skepticism illustrating it with concrete cases and stressing the importance of the EU for further development of the all European countries. The participants attended with interest and addressed many questions to which Deputy Minister was answered specifically and concretely. It was a nice meeting ended by a photo of the whole participants at the National Historical Museum. 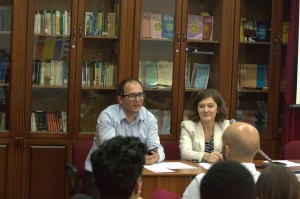 The afternoon session was concluded by the speech of Deputy Minister of Foreign Affairs of Albania, Dr. Odeta Barbullushi, who made a resume of the whole day discussions. She explained theoretically the Euro skepticism illustrating it with concrete cases and stressing the importance of the EU for further development of the all European countries. The participants attended with interest and addressed many questions to which Deputy Minister was answered specifically and concretely. It was a nice meeting ended by a photo of the whole participants at the National Historical Museum. 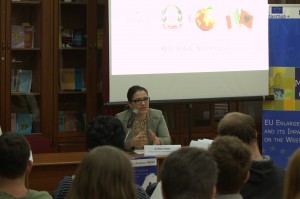 Two papers were presented in the second day and the presentation of the country works for this event. The professor of the Tirana University, Dr. Klodiana Beshku spoke about youth civil society initiatives for European integration followed by a lot of questions and discussions done by the students. The participant’s enthusiasm was grown during the long presentation full of information and knowledge of the Italian Embassy representative Mrs. Lucia Cucciarelli, expert with multi years experience in the EU projects for intercultural dialogue and human rights. She illustrated with the respective music of the country the part of the presentation shown by her. Mrs. Cucciarelli made a real valuation of the Albanian products with which Albania can compete to EU market. 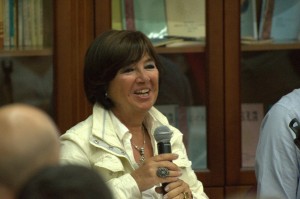 The last part of the meeting was the presentation of the each country work. The youngsters shared their opinions about euro skepticism illustrating with interviews of the youth from the respective countries presented to the conference by videos shown. They explained with concrete data the positive and negative sides that their countries are undergoing after EU accession. There were many similarities in the youth interviews of the various countries, Lithuania vs Romania. But the belief for the union was in the whole presentations because the values of every country can be exchanged and they can complete each other.

The youth participants greeted the Albanian friends for their hospitality and the whole activity organization and together prepared the action plan for the future meeting in Romania.