Skip to content
You are here
Home > Public Lectures > Josip Juratovic: EU Integration as a driving force for the realization of domestic reforms 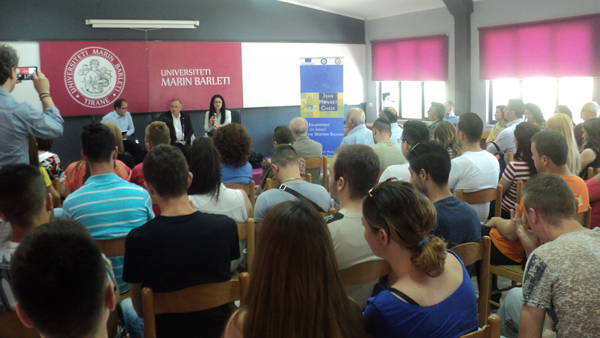 Mr. Josip Juratovic (SDP), Deputy Chairman of the Parliamentary Group for Friendship relations with the countries of South – Eastern Europe and German Parliament gave an open lecture on EU integration as a driving force for the implementation of internal reforms.

Mr. Juratovic in his speech clearly reflected the real problems of the region as well as the strength and the potential of these countries to establish a functional democracy and to be integrated into the European Union. Mr. Juratovic emphasized the importance of internal reforms to the benefit of candidate countries and not as a duty required by the EU. Countries in the region are facing similar problems such as youth employment, reforms in the justice system. Yet, some domestic elites or certain groups do not show interest to address these challenges. Consequently, their attention focuses on empty rhetoric and incitement of nationalist movements. Domestic elites lose more time discussing things that are not realized and never talk about the things that are well done. The policy should be a race to change concrete issues and not rhetoric. Democracy requires compromise and collaboration between the actors, not worthless excuses. The task of elected people is to listen to their citizens’ needs. Moreover, based also on certain European values, freedom must be understood as responsibility and the solidarity should mean mutual respect.

At the end of the meeting there were questions and discussions about mechanisms of the establishing a functioning democracy in the region as well as the challenges of the Left and social reforms in Europe.

Read about this in the Marin Barleti University’s web site