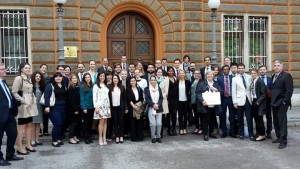 During their Balkans Study Trip Program of the Diplomatic Academy Vienna to Tirana, Dr. Jano gave a lecture on Post-communist transformations in the Western Balkans: EU enlargement and its impact. The program on the Albania’s path towards the European Union, its domestic challenges and its role in a regional context, included a short introductory note on the Bilateral Relations between Albania and Austria by the Austrian Ambassador in Albania Mr. Johann Sattler; a lecture on Albania’s Internal Political Situation by Mr. Piro Misha, the director of the Institute for Dialogue and Communication; and a lecture on Albania’s Foreign Policy in the Regional Context by Ms. Mimoza Halimi the Director of the Department for Europe and Central Asia Department at the Ministry of Foreign Affairs of the Republic of Albania.